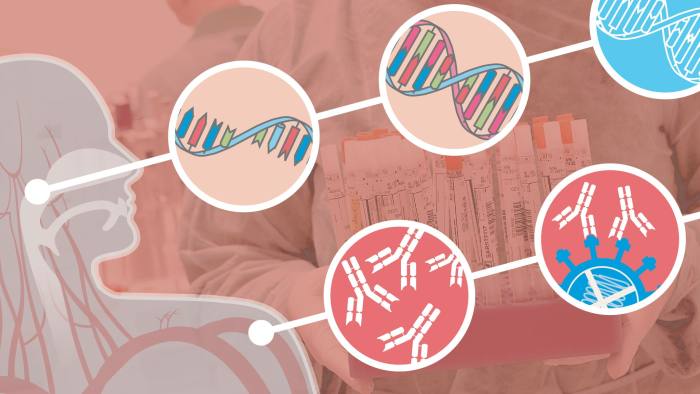 The imperative to “test, test, test” has become a slogan of the coronavirus pandemic since it was voiced last month by Tedros Adhanom Ghebreyesus, head of the World Health Organization. But the simple goal continues to elude even well-off countries that are struggling to track the spread of the virus among their populations. Germany and South Korea have led the way in rolling out tests on a large scale, but the UK and US have been laggards. The greater the delays, the more prolonged the uncertainty over the size of the virus threat. As the hunger for diagnosis grows, as testing kits are rejected and impatience with government mounts, we look at the available technologies, their potential, and limitations. What tests are available for coronavirus infection? There are two main types. The first, an antigen test, detects the presence or absence in the body of the new coronavirus, which causes the disease Covid-19. The second, an antibody test, looks for signs that someone has been infected in the past by searching for an immune response. Since Chinese scientists in mid-January published the full genetic code of the virus — officially known as Sars-CoV-2 — laboratories anywhere in the world have been able to use antigen testing to identify its genes in samples from patients. They use a procedure called polymerase chain reaction (PCR) that has been standard practice in labs for 30 years. PCR samples can come from several different sites in the patient. Simplest is the nasal swab taken from well inside the nose. The back of the throat is another option. For patients in the hospital, a sample from the lower respiratory tract may give the best results. Antigen testing reveals whether someone has a current infection and could, therefore, pass Covid-19 on to others. 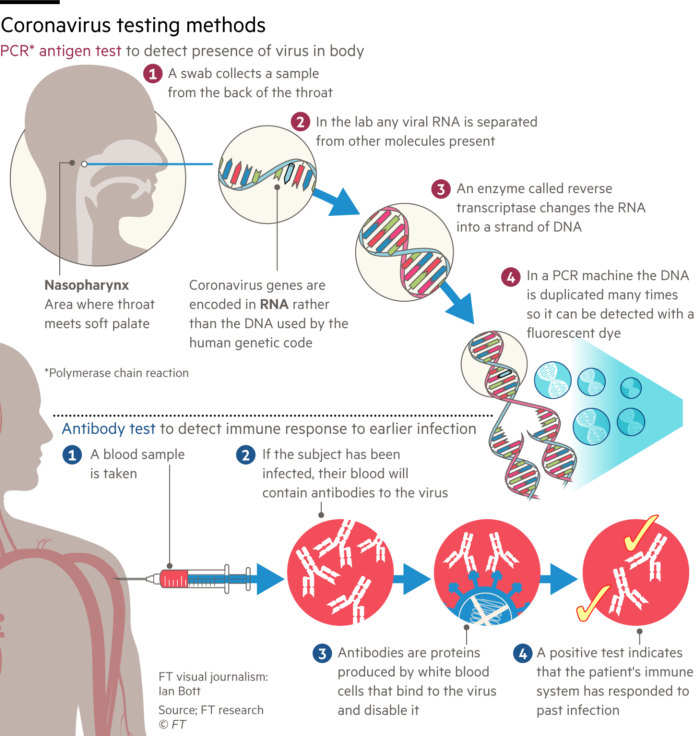 In contrast, antibody (or serological) tests work on blood samples to detect the immunity conferred by past infection. The test kits use proteins from the virus as “glue” to trap antibodies present in the blood, said Eleanor Riley, professor of immunology at the University of Edinburgh. A finger prick should provide enough blood to detect two types of antibodies against Sars-CoV-2. The first, IgM antibodies, are shortlived and may indicate that the virus is still present. They usually disappear a couple of weeks after infection. In their place emerged a second more durable type, IgG antibodies. No one knows yet how long these will last and provide resistance to reinfection — anything from a few months to a few years seems possible. Antibody tests are being prioritized by governments including the UK and Germany because they will be essential to informing individuals whether they can return to mixing safely in society without passing on or picking up an infection. When carried out in a representative sample of the population, they will also answer key epidemiological questions — including how many people were infected with mild or no symptoms. Once developed, antibody tests should give results more quickly than traditional PCR tests, taking a few minutes rather than a few hours, though much faster antigen kits are under development. Who makes the tests? When health authorities began to realize that the coronavirus outbreak might pose a global threat, they started developing tests in government labs such as those operated by US Centers for Disease Control and Prevention (CDC) and Public Health England, which already had ample experience in using PCR technology for diagnostics. Traditionally, antigen diagnosis is done mostly in the public sector, with private companies providing test components such as chemical reagents and swabs for patient samples — some of which have been in short supply. But in recent weeks there has been a huge mobilization of private sector resources as businesses around the world race to enter a rapidly expanding market, rolling out automated PCR kits that process samples much more quickly than conventional labs. New antigen tests are relatively easy to create because “the PCR test is a small addition to an existing test”, said James Gill, a clinical lecturer at Warwick Medical School. But antibody tests take longer to develop because they have to be created from scratch. “You’ve had to physically get patient blood, find the antibodies in that blood (molecules smaller than the virus), create a reproducible antibody in the lab, and then create a reagent test that will react in the presence of that antibody — which can be read by health teams,” said Dr. Gill. The private sector has played an outsized role in the development and manufacturing of antibody tests, though its products still have to be validated by public health authorities before use. The presence of Chinese companies has stood out in the effort to boost the supply of both types of tests. Of 202 companies around the world producing commercialized Covid-19 test kits, 92 are from China, where the outbreak originated and an innovative medical technology sector is thriving. 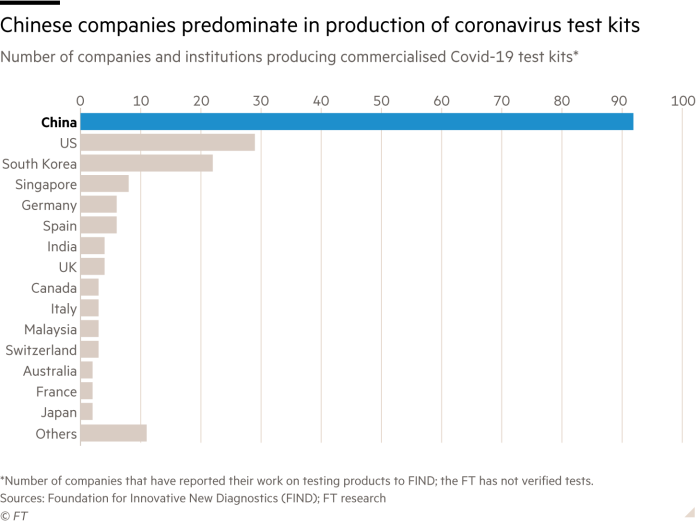 According to data from the Foundation for Innovative New Diagnostics (Find), a Geneva-based non-profit group that tracks product development, the second-largest number of coronavirus testing companies is in the US, which has 29. Find’s list is not exhaustive and does not include some major players that have not sought to appear. Among them are Nasdaq-listed Hologic, whose test the US Food and Drug Administration has authorized for emergency use. Beyond conventional antibody and antigen tests, researchers in universities and biotech companies are developing imaginative new diagnostic technologies. For instance Crispr, a gene-editing technique that has taken the biotech world by a storm can be adapted to recognize and cut specific genetic sequences in Sars-CoV-2, which can then be identified via color changes. How fast are tests being rolled out? Very unevenly — and not fast enough in many countries. Although there is no official centralized database, Find has collated data that indicates a cumulative total of more than 4.9m tests had been carried out worldwide by March 29. But that figure excludes China because the group could only obtain reliable data for one Chinese province. South Korea, the country that got going first with extensive Covid-19 testing, has so far carried out 394,000 (equivalent to 770 per 100,000 people). Iceland has done 4,160 tests per 100,000.


The US was very slow to get started because the CDC’s first test did not work well, so it had to go back to the drawing board to create a new one. It was then slow to allow other labs to test for Covid-19. But over the past two weeks, the US has ramped up testing rapidly. Among larger European countries, the champion seems to be Germany, where public health officials have estimated that laboratories are carrying out as many as 500,000 coronavirus tests a week. Though official data has yet to confirm that number, it suggests that testing capacity has expanded fast in recent weeks. Germany’s decentralized test and laboratory infrastructure means the work is carried out not just in hospitals and doctors' practices but also in special drive-in stations. Manufacturers are ready to supply the world with many millions of antibody tests, but health authorities and regulators are still evaluating their accuracy before allowing them to be rolled out widely. Last week Matt Hancock, UK health secretary, announced that the country had ordered 3.5m antibody test kits from various manufacturers. How reliable are the tests? The PCR test is extremely accurate when carried out carefully by experienced technicians in a well-equipped lab. Because it specifically detects genes found only in the Sars-CoV-2 virus, it will produce very few false positives, said Andrew Preston, reader in microbial pathogenesis at the University of Bath. False negatives — which indicate wrongly that someone is clear of infection — are more of a problem. They often result from problems with collecting and processing patient samples. For other viruses, false-negative rates of 10 percent are widely accepted and they can reach as high as 30 percent. Therefore PCR tests “have more often been used to confirm an infection rather than give someone the all-clear”, said Dr. Gill at Warwick Medical School. The accuracy and reliability of the new antibody tests will not be known until they have been validated and technicians have gained more operating experience. Spain’s ministry of health last week withdrew 8,000 Chinese-made testing kits delivered to Madrid’s regional government because of worries about inaccurate results. But the manufacturer Shenzhen Bioeasy said the problems may have been because of incorrect sample collection or use of the product. Dr. Preston said: “It is not easy to quickly and massively ramp up testing capacity when it requires both high-quality kits and properly trained staff.”